There’s lots of VR news coming out of the 2016 Vision Summit VR Conference. Billed as the definitive event for innovators in VR/AR, the conference is sponsored by Unity Technologies. Unity wants VR developers to see its platform as the go-to solution for virtual reality content creation. But it’s not just a gaming conference. Unity has brought in speakers from Google, Oculus, Sony, and Valve with an interdisciplinary focus.

We hosted the live stream earlier today and the entire keynote is now available. The conference is in Hollywood, CA from February 10-11:

Vision VR/AR Summit is an all-new cross industry event for artists, engineers, programmers, designers, musicians, directors and producers, hardware manufacturers and researchers. It will be a unique event focused on furthering the knowledge base of anyone developing virtual and/or augmented reality content.

We’ll have a follow up on the conference and its implications for media and education shortly. In the meantime, we’ll continue to live tweet the news.

Here’s a partial lineup of the speakers:

We’ll have a follow up on the conference and its implications for media and education shortly. In the meantime, we’ll continue to live tweet the news.

The conference expo includes a wide range of works in games, entertainment, art and education. Here’s the video of the awards ceremony and below, a list of the projects showcased.

Giant Geode of Pulpi by Estudiofuture

Thunderbird: The Legend Begins by Innervision 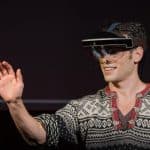 Meta Augmented Reality Glasses on Their