Virtual reality is front and center of the conversations in Hollywood as filmmakers explore a new form of storytelling. But one point not resolved is the format that this media might use for a collective experience. Along comes a company in Amsterdam with an answer to the question – the virtual reality cinema. A Netherlands company – appropriately named “VR Cinema” – is opening a space with more to follow in Paris, Berlin, Barcelona, and London.

This is like returning to the days of Edison and the Lumiere Brothers. Are we going with the individual peepshow or shall we all gather in a large room? Will virtual reality ever feel at home in a public venue? We expect to see lots of experiments here before we settle down into a standardize format (if ever).

For one thing, there’s no need for the sloped floor with with rows of chairs facing a screen.  The chairs can be anywhere – just as long as they can swivel around. And the room never needs to be dark as the screen is literally next to your eyes. Tickets for the experience will cost €12.50 (or about $13.70) a show and VR Cinema sees a capacity of about 400 people a day.

For now, everyone will see the same VR films, though obviously, not necessarily the same scenes. And for the moment, you won’t be watching a virtual reality film, but a prepackaged experience of what VR can do.

You might say it’s more about demonstrating the technology than any really focus on the content – though that could quickly change.

What curious about this project is not what it offers, but what’s missing. Two major points surface here.

First, think about why you go to a traditional theater. Besides the desire to see a film when first released, there’s the social experience of seeing a movie with others. That’s a powerful draw, and it’s kept the theater companies in business despite DVD’s and online distribution arrangements. Decades of doomsday forecasts for the future of public cinema have never materialized.

But in any virtual reality theater, there’s not much of a social experience – indeed, you could image part of the audience gasping at something while another part completely misses what’s going on. Should I turn my chair around because my neighbor had an audible reaction? Or are they just disturbing my enjoyment of the experience? 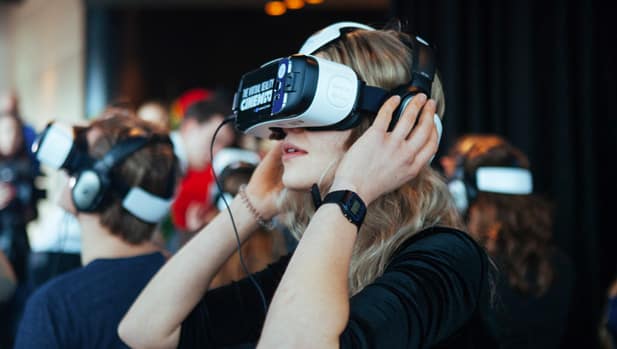 Secondly, we go to the movies to basically rent the hardware. We’re all getting flat screens or projection systems at home but theaters still pull us in with huge screens and professional audio systems. For our “must see” movies, we want the best experience. But oddly enough, VR Cinema is doing virtual reality with Samsung Gear VR. We love Samsung’s VR headset, but it’s easy to have the same hardware at home and do it whenever you like. Even their chairs are nothing much – and after sitting through (bouncing through?) Ridley Scott’s The Martian VR Experience at Sundance, a moving chair definitely enhances your experience of VR.

It’s a little surprising that they did not go with an Oculus or HTC Vive headset, which cost significantly more when you add in the computer you need to run it. As we see it, the future of any collective VR viewing will be found in offering the high-end devices that most people will not be able to afford, or want to purchase, for home use.

The Future of VR Cinema

It’s hard to imagine what a future virtual reality cinema would look like. Will we have open spaces with moving chairs? Individual rooms so that we don’t have to worry about tripping over the coffee table at home? Will social VR reach the point where we see the other audience members inside the VR environment we experience? Or will I want nothing more than a closet  to myself?

And all these questions come up when you think about integrating VR into the business world and education. What will the corporate training room of the future look like? Will our future classrooms be more than bare walls and expensive seating?

Or perhaps theaters will have to become more than seats, though I doubt we’ll ever return to the amazing Loews Wonder Theaters of the 1920’s. Just never forget Marcus Loew’s perceptive quote from that era as we move into a new form of entertainment:

We sell tickets to theaters, not movies.

None of us has a clue as to how we’ll view virtual reality in the future, but give VR Cinema the credit for being the first to step into this space.