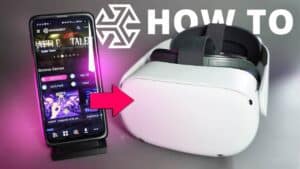 VR gets easier to use as every year goes by and another challenge disappeared this week. With the release of the SideQuest mobile app, you’ll no longer have to content your Quest headset to a PC. Since SideQuest appeared back in 2019, it’s been a popular way for developers and advanced users to upload VR games and apps on the popular Oculus Quest. Until the recent arrival of Oculus’ App Lab, apps had to go through a complicated vetting process on the Oculus Store. The only good alternative was SideQuest – which bills itself as a “discovery platform – for free apps and paid ones through third-party platforms such as Itch.io or Patreon.

SideQuest can still present some challenges for novice users, but it’s worthwhile getting the mobile version, especially now that it offers a wireless solution. SideQuest offers other advantages as well. You’ll be able to download content from the Oculus App Lab and get access to advanced settings on your headset.

Getting SideQuest Set Up

Here is the step-by-step process for setting up the SideQuest mobile app (Android only) from VRScout. This only needs to be done for the initial step up:

If you prefer video instructions (and YouTube seems to be our how-to guide for life these days), Cas and Chary have a ten-minute intro to the process. You can begin at the 3:50 mark if you already have a developer account with your Quest.

App Lab Versus SideQuest – Do You Need Both?

With App Lab, Oculus has made it easier to access VR content. But there is still an application process for App Lab that developers can avoid by posting their work on SideQuest. That allows for both pre-release and alternative content that you won’t find on the Oculus App Lab. UpLoadVR lists some of the reasons you might want access to an alternative platform.

Sideloading allows users to do things that you can’t do normally on the device, or can’t find in the Oculus Store, such as:

The Future of VR is in User Created Content

As welcome as the SideQuest mobile app is, the entire process still needs to be easier. You should be able to download an app, find your headset, and begin uploading content. But since you’re dealing with Oculus and an external platform, there are still extra steps in the initial setup. At least Oculus didn’t cut the connection between SideQuest and their headsets – which some were afraid might happen with the release of Oculus’s own App Lab.

It’s heartening to see the rapid increase in immersive experiences from independent developers and universities on both App Lab and SideQuest. The VR games from studios like Valve and Epic Games are amazing and will continue to be the primary force behind the growth of the XR market. But the consumer VR revolution – like with social media – will ultimately explode when we have easier access to user and student-generated content. The SideQuest mobile app just brought us one step closer.