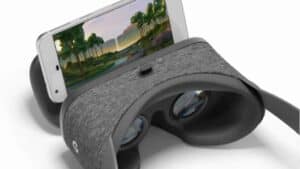 Scratch another immersive technology development off the list. After high hopes and promises of a ubiquitous mobile VR platform, Google Daydream is essentially over. The HMD is still available on the Google Store, but you have to unload the excess stock.

Need proof? The recent Google I/O conference came and went without a mention of the Daydream platform. No keynotes, no talks, no Daydream displays.

Need more proof? The new Pixel 3A released this week doesn’t even support the platform.

It’s an ironic turn for a company that helped kickstart the modern VR revolution with Google Cardboard. Those foldable pieces of cardboard (which essentially began as I/O conference swag) got us through many a workshop in the early days. And we still rely on them for 360 video demos. But not for long.

Road to VR sums up the situation:

Following the muted launch of the first Daydream standalone headset last year (the Mirage Solo), Google has had very little to say about their once sky-high Daydream ambitions. A total lack of anything Daydream related at Google I/O this week only further shows that the company has shifted its interests elsewhere.

The event’s opening keynote didn’t mention Daydream once in its two hour span. The Google I/O schedule doesn’t have a VR category this year, let alone a single session with a description mentioning “VR,” virtual reality,” or “Daydream.” In the press area of the event, a ‘Made by Google’ kiosk showed off the company’s hottest hardware, but excluded any Daydream headsets. Officially, Google has no news to share about Daydream at I/O this week.

Two things put an end to Google’s plans to conquer the VR space with its fabric-covered HMD – augmented reality and Oculus Quest. And other issues got in the way. The Pixel phone never caught on as Google planned. Try as Google might, they could get only eight other phones to be “Daydream ready.”

And Samsung’s Gear VR offered an excellent alternative for those on the most popular Android phones.

But as Road to VR notes, AR is a major factor.

. . . Google’s focus has clearly shifted toward augmented reality, and it isn’t hard to understand why. VR’s primary use-case on a mobile operating system like Android is entertainment. But beyond operating an app store which can host entertainment content, Google itself isn’t an entertainment company. They hoped VR developers would flock to the Daydream platform because of its (potential for) scale, but Google perhaps underestimated the chicken-and-egg problem of needing quality content to attract users to the platform before developers would see it as a viable option . . .

Google is primarily an advertising company under the guise of providing information. That’s perfect for augmented reality. And the potential here is staggering. Most of our current discussions of AR leave out the way it could commercialize our surroundings. Think of walking around in your own personal Times Square. No matter which way you look, it’s advertising and information.

And since Apple will have AR Glasses in perhaps another year, it’s where Google wants to be. As it is, Google has some catching up to do with phone-based AR.

You can’t blame it all on AR. Oculus Quest also had a hand in bringing Google’s VR dreams to an end. A VR headset designed for a mobile phone made sense when we didn’t have standalone HMDs. But now that we have Oculus Go and Quest (in a few weeks), why would anyone carry around a Google Daydream VR device? An all-in-one unit just makes more sense, especially in the education and corporate markets. No connections, no separate devices. Just turn it on, and it works.

Perhaps the only question left is how much long Samsung Gear VR will hang on? Check back in a year – we think we know the answer.

Daydream Made the Tech Easy

Virtual reality has always been challenged by the need to focus on technology. Google Daydream VR was a huge step in getting the tech out of the way. You just slipped the phone in the HMD, and you were off. The hand-controller was a model of design simplicity (too simple in fact). But the device was easy to use in workshops and public events.

The three-year life space of Google Daydream VR is a reminder of how fast immersive tech is developing. And that if you don’t grab most of the market early on (à la Facebook), you end up with none.

Google and Apple’s augmented reality face-off is already underway. But it doesn’t amount to a whole lot without the smart glasses to go with it. Give it a year, two at most.

We’ll miss the Daydream platform, but it’s time to move on.

A Conversation on VR with Brett Leonard,

Can You Resist a Deepfake Salvador Dalí