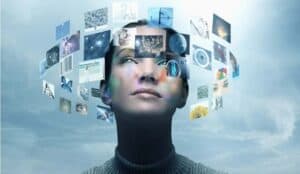 You knew this was coming – it was only a matter of time before Facebook began advertising in VR experiences. 97% of their revenue ($86 billion in 2020) comes from advertising – the social media platform is only the means for generating it. Back in 2019, Facebook announced that it would begin using “. . . information about your Oculus activity, like which apps you use, to help provide…more relevant content, including ads.”

This isn’t the first time advertising in VR has come up. HTC pushed out Vive Ads for Viveport way back in 2017, but you probably never even noticed it. Not much came of that project, as it was a little too early in the  XR consumer revolution.

Facebook is the dominant player in the VR market right now. And the Oculus Quest 2 is the best standalone headset available at a consumer price point. With Oculus swallowed up by the social media giant and the requirement that users must have a Facebook account, advertising in virtual reality was a foregone conclusion.

It’s hard to know what the gaming community will think of the commercialization of our immersive experiences. But it could be a troubling development for the use of VR in education and by nonprofits. And creators could find themselves torn between a potentially lucrative source of revenue and compromising for the advertising dollars.

Facebook’s Test of Advertising in VR

We really shouldn’t refer to this as a test, even if Facebook does. Here’s the announcement from the Oculus Blog:

Our primary focus at Facebook Reality Labs (FRL) is to bring more people into VR, advance the consumer experience, and make progress on our longer-term augmented reality initiatives. We’re also exploring new ways for developers to generate revenue—this is a key part of ensuring we’re creating a self-sustaining platform that can support a variety of business models that unlock new types of content and audiences. It also helps us continue to make innovative AR/VR hardware more accessible to more people.

Don’t expect to see ads in VR everywhere at the beginning. Facebook is rolling this out slowly and looking for developer feedback. The first ads will appear in Blaston from Resolution Games.

The advertising in immersive experiences will follow Facebook’s standard practices.

Oculus ads will follow Facebook’s advertising principles, the first of which is “build for people first.” It’s also important that people can manage the ads they see, so we’re including controls to hide specific ads or hide ads from an advertiser completely. Users can also access more detailed Ad Preferences from any ad via our “Why am I seeing this ad?” interface. As our tests progress, we’ll continue listening to feedback to improve the ads people see.

Facebook may say they are putting “people first,” which sounds good, but this is VR, not an external screen that you can look away from. And while you can stop and access more detailed information on “Why am I seeing this ad?” that is a guaranteed way to break the sense of immersion and presence in a virtual experience. There are lots of issues here, including Facebook’s own track record on managing personal data. And then there is the major one – what are the boundaries of our private space?

In the announcement, Facebook sees two major questions that arise in the advertising in VR: privacy concerns over physical data and conversations between users on social VR platforms. For now (let’s repeat that – for now), Facebook claims that

While Facebook has “no plans to use movement data,” that could obviously change. If it did in the future, it undermines a basic premise of our lived experience in the world. Tracking our body movements is an advertiser’s dream but a personal nightmare.

The original HTC Vive Ads for Viveport was troubling enough. The service could tell if you looked at an ad or not. The cursor is no longer on the screen but in the gaze of your eyes.

But with Facebook, the most challenging element is what they leave out:

They completely fail to mention anything regarding data from eye-tracking, which will be a standard feature in headsets (including Oculus) in the coming years.

Right now, digital advertising is on our screens is only tracked based on what we do within that frame. It’s a whole other world when advertising becomes part of our virtual environments. VR is, as Stanford’s Jeremey Bailenson has often said, not a media form but a human experience. In effect, Facebook is looking to commercialize the latter.

This is like product placement in the movies on steroids. And we’re just talking about virtual reality. Wait until the advertising comes to our future AR glasses.

In-game ads (IGA) have been around since a self-promotional advertisement was inserted into the 1978 computer game Adventureland, long before the consumer XR revolution. Many gamers see IGA as invasive and a distraction from the core experience of a game. And if you’ve already paid for a game, why pay again through additional ads? Blaston, the first game in the VR ad test, has been hit with a barrage of negative one-star reviews after Facebook’s announcement – along the lines of “This game went from good to garbage.” To the developers’ credit, they’ve responded to every single negative review, though at this point, they probably wish they weren’t part of the initial test.

On the other hand, the Oculus Quest headsets are probably being sold at a loss, and advertising could ultimately result in cheaper hardware to expand the VR audience. That benefits game developers and everyone in the XR revolution. But the question remains: who controls the ad placements, and does it break the sense of immersion?

This is a breaking story and the latest is that Blaston will no longer participate in Facebook’s test of advertising in VR. As we noted, the reviews were massively against it and the developers decided to opt-out. Here is their announcement on the Oculus Store:

What this means for Facebook’s larger effort to commercialize virtual experiences remains to be seen. Clearly, it didn’t go well for Blaston and the VR gaming community seems to be increasingly opposed to the idea.

Immersive Ads in Education and the Arts?

For education and the arts, it’s more complicated (isn’t it always?). Commercial ads in learning resources are problematic if not banned in many K12 settings and not something that will engender support in higher education. Will we see medical simulations sponsored by drug companies? Virtual historical experiences supported by tourist offices? No one knows where this leads to down the road, but the negatives weigh heavily.

And what will be the impact on artists and nonprofits? Expanding the VR market furthers the connections with potential audiences. But financial support might become more challenging if organizations (including Facebook) focus on generating revenue through advertising in VR.

Let us know what you think, and we’ll keep you updated as Facebook rolls out advertising in VR.

Join us for the Launch of the State of X