There have already been major projects in using VR in medicine – from education and patient care to break-through developments in Exposure Therapy and surgery. At the University of New South Wales, researchers have taken immersive technology to the next logical step – using VR to travel inside your body. Taking data from a patient’s scan, they can now visualize the data in a game-like virtual environment.

In the not too distant future, you may be walking inside a virtual re-creation of your own body, watching how drugs are interacting with your system. Or on a darker note, the use of VR in medicine may show you how a virus is attacking your body.

The biological drama within us is always there – but viewing it was limited to those in research labs.

VR in medicine at UNSW

According to Associate Professor John McGhee at the 3D Visualisation Aesthetics Lab at UNSW,

“We take data from a patient’s PET scan to visualise the data,” he said.

“It will help the scientific discovery process, as we can see how cells behave in a way we never have before.”

And in the future, cancer patients could see a virtual version of themselves, and track where drug treatments are ending up in their bodies.

The technology can play an educational role for students, assist researchers in visualizing data and help patients understand their treatments.

And on every level, it’s profoundly engaging.

Think about it for a moment. When you walk across the surface of the cell in the VR experience, you have been shrunk down to the height of 40 one-billionths of a meter. Or about 40 nanometers.

Like many other virtual reality projects we have seen, the Journey to the Center of the Cell project cuts across traditional disciplines. John McGhee’s background is in art and design and he is working with Professor Maria Kavallaris, from UNSW Medicine and Children’s Cancer Institute. The virtual model was developed by Dr. Angus Johnston, from Monash University where he works on the design of therapeutic drugs at the nanoscale.

I saw we could do so much more with VR than selling products and superheroes . . . We have amazing gaming technology and we can use it to benefit patients and specialists. The inner workings of the body can often get lost in specialist data and this makes the process democratic.

There’s an all-too-short 360 video of the experience:

You don’t need to look far to see a number of VR in medicine projects. Medical Futurist highlights five ways that VR is already changing healthcare, from helping surgeons in the operating room to a better understanding of patients. In our recent webinar for EDUCAUSE, we pointed out USC’s long-running project on treating PTSD, the SnowWorld pain management project at the University of Washington, and others.

VR will not just revolutionize education but will transform people’s lives. 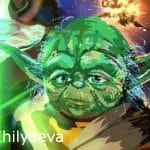 Six artists collaborate to do a VR paint 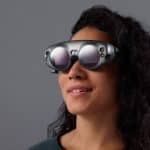