As Joshua Barone notes in The New York Times, VR in classical music hasn’t resulted in the most exciting immersive projects. Like other disciplines, both opera and classical music wrestle with how to integrate this new medium. The ultimate question is: how do you incorporate human experience into an art form founded on a bifurcated paradigm. A deeply ingrained model of an active stage and a passive audience?

Of course, at their best, performers and audience connect on the deepest levels. If you don’t go to opera, it’s worth reading Imogen Tilden’s excellent piece in The Guardian on why opera matters. As Richard Mantle of Opera North has said, “It is storytelling at its most vivid and manipulative.”

You could say the same of a good VR project.

But in opera, the roles are still clearly defined, boundary lines drawn between performers and audience. The quickest solution for incorporating virtual reality (or at least one aspect of it) has been to shoot 360 videos from the stage. That brings the audience into the action to a degree. But it’s still mostly passive. You gain a new perspective being surrounded by the musicians, but you’re never really part of the experience.

In other words, it’s interesting for 15 minutes or so. But it’s not something you’ll come back to again and again.

Dance has fared a little better. Maybe it’s the opportunity to see the movement and interactions of the dancers from a different perspective. And Modern Dance has always flirted with a participatory dynamic, blurring the line between performer and audience. For a current example, see the VR project, Dust, by a group of Prague-based artists who create participatory performances.

A VR in Classical Music Breakthrough

This week’s article in The Times was spurred by the debut of the Dutch composer Michel van der Aa’s “Eight.” As opera goes, it’s an incredibly short piece, about 15 minutes. But you’ll do much more than passively watch. This is opera for an immersive age, for an audience that increasingly wants to participate in an experience.

As Barone describes it,

“Eight” is an opera taken in through a virtual-reality headset. In about 15 minutes, with a genre-bending score that verges on pop (the singer-songwriter Kate Miller-Heidke is featured), it tells a poetic story of an old woman looking back on her life.

She beckons you to follow her down a corridor with white walls; once you start walking, you almost never stop, even as the hallway seems to open up into a mountainside and the full cosmos. (In reality, this all takes place in a space no larger than a bedroom.) As viewer, you are very much part of the piece, your hands visible as they reach for a railing and, at one point, lift a red tablecloth to crawl underneath.

You literally follow the performer through a mixed reality environment. The trailer below doesn’t give you a sense of the experience but offers a few glimpses of its development. You can find more details on the two-year production process at The Virtual Dutchmen, the 3D studio that was responsible for the content and development of the project.

No matter what art or discipline, successful VR projects always break free of the traditional model. When it comes to VR in classical music, the digital producer Brian Wise issued a stark warning in 2016. Unless you completely shift how you think about the experience, immersion will fail. As he put it,

The same could be said of any other field – replace “concert hall” with the paradigmatic experience of your discipline or practice. And yes, for those of you in education, drop the word “Classroom” in there. This is precisely what makes the developments in VR and AR so incredibly creative and simultaneously challenging.

But when we begin to incorporate virtual reality, what happens to the concert hall? The classroom? A younger generation is coming of age having grown up on the far side of Instagram and Snap. They’ll want to be part of the experience, to engage with the performers, to see their own creative impulses in the work. Most of all, they’ll want to shape the story, make it their own. None of us are ready for that. 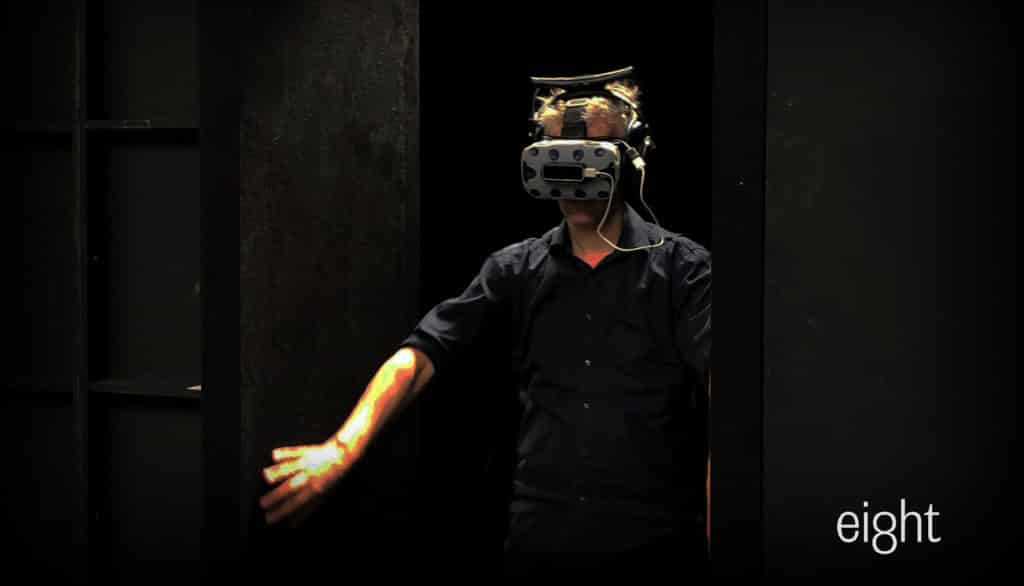 Of course, the traditional paradigms of the concert hall and classroom evolved for a reason. They scaled opera and education to much larger audiences. As it is, neither one runs on a solidly viable economic model but they work. Especially when donors and students cover the costs through charity and debt.

As for “Eight”? Only one person can experience it every 15 minutes. Like VR in the learning environment, efficiency takes a nose-dive (though there are other benefits there).

If you’ve ever endured the long waits at the VR section of film festivals, you know exactly what we mean. How the economic model scales with immersive experiences in the arts (or education) remains to be seen.

“Eight” is just the latest in a series of creative projects by Michel van der Aa. If you happen to be passing through France this month (for which you’ll earn our undying jealousy), make a point of getting to the Aix Festival. This is groundbreaking work that opens the door to a remarkable future not just for VR in classical music, but immersive art in all its manifestations.