Google Cardboard seems straight out of our maker-culture. An inexpensive device that opens up a new realm of experiences. Google recently announced that five million Cardboard units have been distributed. 20% of the total is due to the NYT VR project, but Google Cardboard has surfaced through other co-branded options. With some 25 million views, this has been the pathway to virtual reality for most of the public.

A new VR strategy that will pay off

Many sites (including Digital Bodies) highlighted the recent developments that point to a new VR strategy for Google. Clay Bavor, who oversaw Google Apps, including Gmail, Drive, and Docs, is now head of their VR area. And rumors are that Google will develop a less disposable VR headset, something that can compete with Samsung.

We doubt Google will go after the turf claimed by Oculus VR. You won’t get the best VR experience using a Smartphone, but the market is limited for high-end VR that requires a gaming computer or laptop. And there’s always that issue of the cable as you try to walk around.

Google already owns a large segment of the mobile market, and VR is the perfect way to leverage it for new media. Think YouTube.

But where is education in VR? 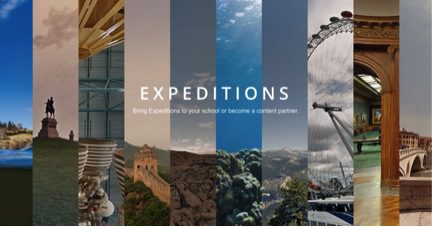 Unfortunately, the success of Google Cardboard has not translated as well in education. The Expeditions project counts for only 500,000 of the 5 million units distributed. That’s not insignificant, but The New York Times covered twice that number. It seems small given that Google pushed the Expeditions project at the I/O conference last summer.

What could be preventing wider distribution in education? Logistical challenges? Instructional resistance? Institutional caution? Google has not released the numbers on how many schools applied to the Expeditions Pioneer program, so it’s hard to say why the numbers are low.

At some point, educators will need to move forward in VR on their own. It’s easy enough to ask students to purchase Google Cardboard, and the VR apps are free. Integrating VR into the learning environment is not without its challenges, but Yoda’s whispering in my ears the insight in Star Wars:

The future of Google Cardboard

Even if Google develops a new VR headset, we suspect Cardboard is not getting retired any time soon. It is portable, inexpensive, and works across multiple devices. And The NY Times remains a model here – ship it out to your users for free. It’s an incredible marketing tool for engaging your customers with new media. At the Sundance Film Festival, you can easily see the opportunities for expanding viewers’ interaction with films – both VR Films and others.

Two years ago, no one would have looked at Google Cardboard and thought five million units. It’s been a remarkable ride so far. But we’ve only taken the first step.

The NY Times’ VR Film of the Presi