The latest work of the Weather Channel tackles climate change in mixed reality. We’ve highlighted their work before on hurricanes, floods, and tornadoes. This time, we get a visualization of Charleston, South Carolina in 2100. The streets are flooded, the houses unlivable in the rising waters. The short segment with meteorologist Jen Carfagno quickly shifts to present-day Norfork, Virginia. Here, it takes nothing more than a high tide and summer breeze to push water into the streets.

Finally, the camera zooms up to Greenland where she finds herself standing near the famed Jakobshavn glacier. We’ve been keeping detailed logs of its location since 1851. In less than two centuries, it’s lost twenty-five miles of thousand-foot deep ice. 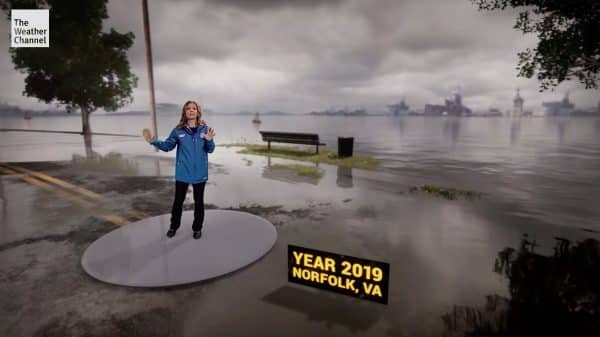 Together, the three portions present a look not just at the future of climate change, but its present and past, a three-pronged effort to shake viewers out of their malaise.

We’re always trying to figure out a way to tell climate change in a way that resonates with people, and it’s extremely difficult . . . People tend to ignore things that aren’t happening right now, where they can’t quantify how it’s affecting them. We’re constantly trying to find that story for climate change that can get people to understand what’s going on and to listen to the science.”

The Channel’s climate change in mixed reality piece is the first to focus on a broader issue instead of an extreme weather event. While the visuals are compelling, you get no real sense of why the sea levels are rising – except that glaciers are melting and we “ignored the warnings.” But you’re not going to pack a lot of scientific arguments in a two-minute segment.

It’s interesting to compare The Weather Channel’s approach to the VR/360 video series This is Climate Change, by Danfung Dennis and Eric Strauss from the VR studio Condition One. The four-part at last year’s Tribeca Film Festival put you on the glaciers and in the desert in an immersive experience of the effects of climate change.

It also required a much longer investment in time and having the appropriate gear (though you could experience it in Google Cardboard). The Weather Channel, on the other hand, counts its viewership in the millions, having far greater reach. Don’t let the long lines and waits at VR film festivals and expos delude you. Distribution remains a fundamental challenge for 360 video and virtual reality.

That will change as the hardware becomes less expensive and people are more comfortable using it. Until then, The Weather Channel offers a highly creative approach to visualizing climate change in mixed reality even if the final result ends up – for now – on our flat-screen TVs.

Chris Milk on Storytelling in AR and VR