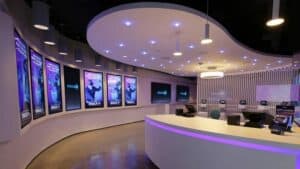 The failure of the IMAX VR Centres shows once again that Virtual reality is still seeking its place in the world. Much like early cinema (do we show this film in a cafe? The fairgrounds? A music hall?), VR is still looking for a physical venue and a distribution method to call its own. If IMAX proved one thing, it’s not going to be the lobby of your local cinema. There are lessons here for anyone setting up public VR experiences, even if they’re only temporary.

Has IMAX cracked the code to mainstream VR?

The first IMAX VR Centre opened in Los Angeles to glowing reviews – an article in The Verge offered the tantalizing prospect above that the project would bring VR into the mainstream.

Let’s dial back the futuristic purple lighting for a moment and see how we got here. The Centres rolled out with much fanfare a year ago. They weren’t alone as other cinema chains such as a MK2 in Paris were also jumping on the VR bandwagon. But with IMAX’s huge screens (though they are shrinking in size), offering VR experiences seemed a natural fit.

At launch, the IMAX VR Centres offered a mix of immersive games and experiences in 14 modernistic pods – 12 x 12 foot enclosed spaces with HC Vive headsets and pulley systems for the cables. A note for those of you designing VR installations – pulley systems are not just an accessory. If you are going run the cable from the headset up to the ceiling to get it out of the user’s way, do it right. Nothing breaks presence faster than something tugging on your head. IMAX’s solution was at best 50/50 on this.

You could buy a ticket for one experience or do a “Sampler” to try out a variety of them for around a dollar a minute. Attendants were available to get you set up and troubleshoot any problems. It seemed like the perfect solution.

One thing IMAX realized was that it would take more than high-end hardware to make this a success. They set up partnerships with content producers such as Ubisoft and Skydance Interactive. And IMAX announced it would work with Google to help fund the development of a cinematic-quality VR camera based on Google’s Jump platform. Putting up $50 million suddenly made them a major player in VR content production. With Facebook’s Story Studio closing down in May 2017, it was a boon to creators.

When you added it all up it seemed like a sure-fire play to bring VR into the mainstream.

And then the sky falls

A year and a half later and IMAX is ending its investment in virtual reality. The Centre in Kips Bay, New York closed this week leaving them with only four sites. As Variety notes, CEO Richard Gelfond’s original excitement had vanished,

The consumer reaction was extremely positive, but the numbers just weren’t there.

And along with the IMAX VR Centres, the content production partnerships and the Google camera project were canceled. Once again, virtual reality took a stab at becoming mainstream only to fall victim to finances and other issues.

Let’s see if we can save a little of that multi-million dollar investment by drawing some lessons here. VR will be mainstream but clearly not in the format that IMAX envisioned.

First, the closed pod approach is not the solution for public installations. Right now, high-end VR experiences in public spaces require an attendant. Usually, someone can help 2-3 users at a time – but only if they can see them. Compare IMAX to Facebook’s solution at the recent Oculus Connect conference – multiple spaces with transparent walls. People also like to see what others are experiencing through wall-mounted screens. That’s not easy when you’ve created private spaces.

Second, standalone VR headsets that do not connect to a computer are the future. At every film festival and VR expo we’ve been to – and we feel like we’ve been to them all – those projects using Samsung Gear VR or Oculus Go always have the least problems. The upcoming Oculus Quest will make public installations much easier. If you do anything in tech, you know the minute you connect two devices, you’re opening the door to problems (even something as simple as printing can still be temperamental in the corporate world).

Finally, if you’re charging a lot, you better make it truly compelling. Take The Void as a model. Design experiences where multiple users can interact with one another. Have real objects (such as door handles and railings) match what the users see in the virtual environment. It’s breathtaking and keeps people coming back for more. Especially when you have multiple endings in the experience. As Wired noted back in September, location-based VR is still a booming business, but only when you are

We see virtual reality splitting into two areas – high-end installations for entertainment and research and home-based VR for everyday use. The VR arcades will survive a while longer but only because they also offer a social experience.

In hindsight, the IMAX VR Centres were doomed to fail, relying on tethered headsets and a paucity of content. They completely missed the developments in free-roaming VR – which will take off even more with Oculus Quest.

The real lesson here in working in virtual reality is not to look at where the high-end technology current is, but where it’s going. And if you’re investing resources in a permanent installation, build for flexibility. The field is simply changing too fast to do anything less.