Mindmaze is a fascinating VR interface that sounds straight out of the future. It’s a VR headset that works with your brain. Read that again – your brain. This isn’t tilt-tracking or eye-tracking or any of the myriad proposed solutions to help us navigate virtual worlds. You can call it thought-powered virtual reality.

Don’t look for this on the market anytime soon, but it could be an innovative solution to the VR interface challenge. And a hint of our rapidly evolving relationship with technology.

The headset is in development by Mindmaze and is called MindLeap. The technology,

. . . is meant to scan and then predict brain and muscle activity in the user via a web of sensing electrodes and head-mounted motion capture cameras.

And it comes with some serious features. It can seamlessly switch between augmented and virtual reality (try that, Oculus), includes high speed (up to 120FPS) hand and finger tracking, gesture control, depth sensors, and 3D image processing. And if that’s not enough, it includes head-tracking and integrated motion capture.

According to Dr. Tej Tadi, the founder and CEO of Mindmaze,

If I have movement data, muscle data, brain data, I can weigh for information, so I know that you’re going to move your hand, I can predict it from this, but I can also predict it from your muscle activity, and I can confirm it with my motion capture camera that you are moving the hand. 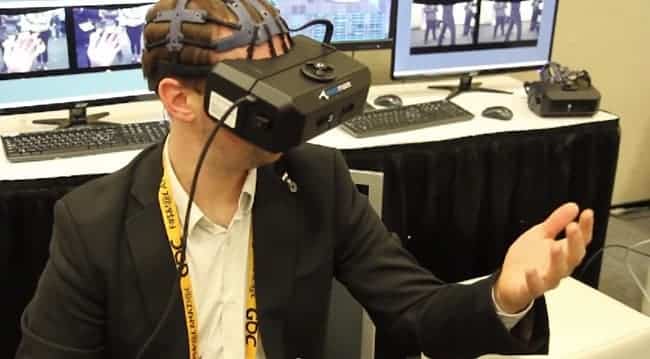 So Mindleap actually combines brainwave reading with a motion capture camera. We already have wearables in the market that attempt to measure or influence your brain activity – Muse and Thync come to mind. But this is the first attempt to merge EEG measurements with your visual senses to control your virtual environment. While brain-wave sensing devices are rapidly improving (we’ve gone from hospital only equipment to consumer devices) they’re still not as accurate as we’d like. Combining the data with a motion-sensing camera may create the zero latency solution we are looking for in a VR interface.

It should come as no surprise that Mindmaze is already a significant player in the healthcare industry. In fact, it was the use of gamification in helping patients recover from traumatic events that lead the company to think about consumer products. If Mindleap could be incorporated into Oculus Rift or HTC’s Vive, you’d have an incredibly powerful VR headset. One that moves from observation to interaction with a virtual world:

MindMaze puts your brain into the game. Never before have neuroscience, virtual reality, augmented reality and 3D full-body motion-capture come together in a games system. Gamers will be able to see, feel and experience virtual gameplay with absolutely no delay or need for controllers.

WIth billions in funding, Mindmaze joins the rarified atmosphere where Magic Leap lives. However, they’re definitely much closer to a consumer product than the secretive company in Florida. And with their research and devices already in use in neuroscience and rehabilitation, this is medical grade technology. In other words, no untested Kickstarter-type promises here.

MindLeap would not only revolutionize VR gaming, but everything we do in virtual reality. It’s a whole new world when the interface is directly connected to your brain.