Few of us are huge fans of the video conferencing platforms available these days. Put enough people in a virtual meeting, and you’re staring at what looks like rows of security camera footage. This is our new COVID-19 environment, the primary way we’re supposed to learn, be productive, and collaborate with our colleagues. So the announcement of Microsoft’s virtual auditorium for Teams caught our interest. It’s a development that breaks out of the current conferencing paradigm and pushes us a step closer to the future.

Virtual meeting spaces have been around since the early days of Second Life, but their use is expanding during the current pandemic. They range from low-requirement platforms such as Mozilla Hubs to the more complex options like Spatial (currently free during the Coronavirus pandemic). The challenge is that the more complex these virtual spaces become, the more bandwidth they require. Spatial gets around this by sending you what is essentially a video feed if you’re accessing it through your laptop, but that limits what you can do. So except for small groups or small, well-funded companies that can provide their employees with VR headsets and bandwidth, we’re still spending most of our time in traditional video conferencing.

What Microsft is rolling out in late August for its new “Together Mode” in Teams is a bit of a compromise. You’ll still be in a basic video conference framework, but it will look virtual. The advantage is that it will appear as if everyone has been transported to a different location. No more messy living rooms and kitchens in the background, but most importantly, no more faces in video boxes.

Here’s the description from Geekwire:

Microsoft is launching a new feature for video meetings that places participants against a shared virtual background, removing individual backdrops in an effort to make it easier to pick up on non-verbal cues and to interact more like in real life . . .

. . . The feature, known as “Together” mode, will be generally available for Microsoft Teams in August, starting with a virtual auditorium, and ultimately expanding to offer other backdrops such as a coffee shop and classroom.

Microsoft’s one-minute video gives you an idea of how it looks and feels.

The well-known author, musician, VR pioneer, and current Microsoft researcher, Jaron Lanier, showed off the platform to journalists this week. From his perspective,

It makes pandemic-era meetings less miserable, less isolating, less fatiguing, less weird — although a little weird in its own way.

As Lanier admits, it still comes across as artificial. But at least you appear to be in the same space as everyone else.

Microsoft has been rapidly upgrading Teams, with Gallery View released last month and a new Dynamic Mode coming in August to make presentations easier. Teams now has 75 million daily active users, up 70% in just the past six weeks.

The most exciting aspect of Microsoft’s AI-driven Together mode is that it captures some degree of people’s interaction with one another. Mary Czerwinski, a cognitive psychologist at Microsoft, points out how we live in a world of complex visual clues that do not come across in traditional video conferences.

There are all kinds of subtle cues – head nods, facial cues, body language – that we use to show that we have an issue, or we want to speak, or we agree or don’t agree.

In Microsoft’s virtual auditorium, she sees a higher degree of interaction.

Together mode puts the truth back in the gesture. When head movements have actual meaning, aligned with the intention of the people, things become less confusing, and that reduces fatigue because you’re no longer bewildered by what’s going on.

We’re not thrilled that the initial backdrop for Together mode is a virtual auditorium – we seldom have productive meetings sitting in rows of chairs facing someone at the front of the room. And Microsoft’s design for the classroom backdrop looks very teacher-centric. The image below comes across entirely as a lecture format, the antithesis of collaboration. But Microsoft says it will feel different in practice, and students will feel like they are in the same space with each other. 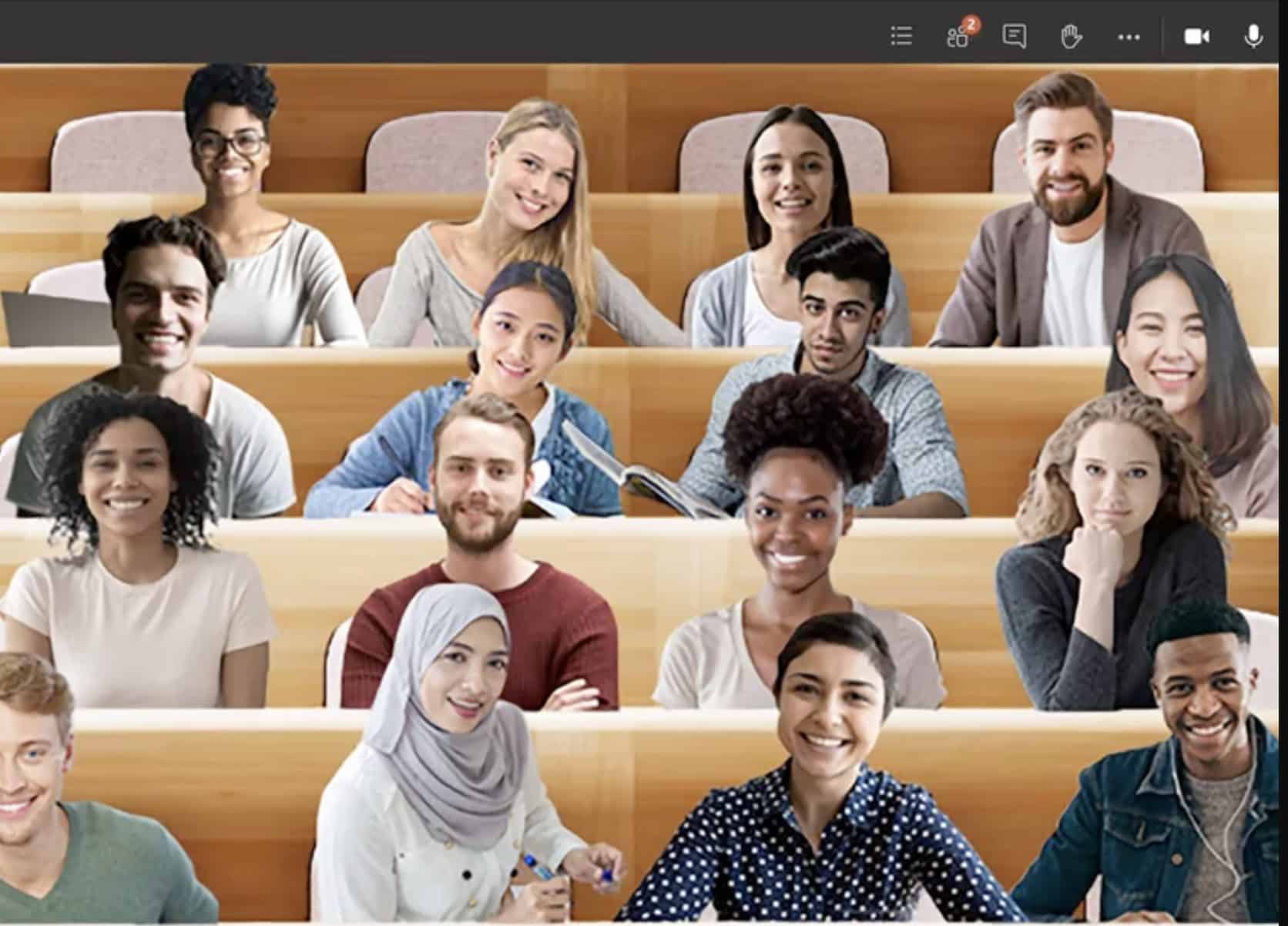 We’re most intrigued by the coffee shop backdrop. It may be the virtual space that combines the right blend of formally and informality.

The Influence of Virtual Spaces

In some ways, Microsoft’s Together mode in Teams is responding to the rapid development of virtual collaboration spaces. Its virtual auditorium offers the illusion of shared space and captures a slice of the human interaction that is missing when we’re confined to the video-in-a-box format. And that just might help us break free of the fatiguing qualities of the current interface in Zoom and Teams.

All of this will dramatically change not that far in the future. Our meetings will be done virtual spaces with avatars (either lifelike or not). The current virtual collaboration platforms from Hubs to Spaces, Engage, VirBELA, Nanome, and others are just a hint of how we’ll work and learn in the future. Until we get there, Microsoft’s virtual auditorium is a small but fascinating step in that direction.