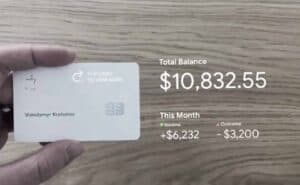 Here’s a fascinating Apple Card AR concept project that would provide your card balances and transactions through augmented reality. The project is by AR VR product designer Volodymyr Kurbatov and not done by Apple. But as the company moves closer to releasing AR Glasses, we wouldn’t be surprised to see AR experiences like this one included.

We still think Apple’s smartglasses won’t appear before 2022 – especially given the economic slowdown due to the Coronavirus pandemic. But Apple continues to lay the foundation for a complete augmented reality platform. Speculation is already rampant that iOS 14, which may be available in September, will dramatically enhance the iPhone’s AR capabilities. As 9to5Mac notes,

Apple is developing a new app as part of its work on iOS 14. The new app, codenamed Gobi, will allow users to get more information about the world around them by using an augmented reality experience on the phone.

You can already see the fruits of Apple’s work in the new iPad Pro with its LiDAR scanner that works with the cameras, motion sensors, and frameworks in iPadOS. If Facebook has plans to map the world in augmented reality, Apple may get there first with the tools to do it.

As Apple says in their description of the iPad Pro,

The custom-designed LiDAR Scanner uses direct time of flight to measure reflected light from up to five meters away, both indoors and out. It works at the photon level, operates at nanosecond speeds, and opens up tremendous possibilities for augmented reality and beyond.

It’s that two-word phrase at the end – “and beyond” – that is most intriguing. And likely, what gives Facebook, Google, and Microsoft sleepless nights. More on that later.

Until Apple releases a product, we’ll have to be content with their limited augmented reality demonstrations, such as last year’s AR Art experiment and the AR shopping project. It’s developers like Volodymyr Kurbatov, who are showing us some of the other possibilities.

When the ‌Apple Card‌ is viewed with an AR app or an AR headset, it displays quick access ‌Apple Card‌ info such as total balance and recent transactions, all in a handy list. It even imagines a feature that would allow for swiping through information or editing card info via gesture, which isn’t really something that AR apps do at this time.

Presumably this functionality would be tied to an individual ‌Apple Card‌ and linked by an identifier on the card itself, but we don’t need to worry too much about the security since it doesn’t exist yet.

You don’t need MacRumors to remind you that this would be a privacy nightmare. For all the benefits of seeing our financial data “live” in the real world, we would need layers of safeguards. I’m trying to visualize something like a virtual version of the visual keypad guards we have installed on ATMs.

But augmented reality is going to open the privacy floodgates on multiple levels. What we share now on social media will seem minuscule to the data we’ll release if we start broadcasting our identity through AR when we’re in public spaces.

Until then, Volodymyr Kurbatov’s Apple Card AR concept is a fascinating glimpse into the ways augmented reality will bring data to life. It wouldn’t surprise us to see Apple offer something similar once their AR Glasses arrive.

We Need These Button-free Controllers fo